Fuerteventura – Hiking around the Calderon Hondo

Here again a new blog post from a stay in Fuerteventura. Of all my previous posts about Fuerteventura, this one is the most northerly on the island.

There was a short article written about this location in our travel guide, and so we made our way to the north of the island. Since we usually have our hotel far to the south, it took one and a half hours by car to get to Lajares. In Lajares, you have to turn north on Calle la Cancela at the roundabout next to a sports field, and after about half a kilometer you can park your car on the right side of the road. You can hardly miss the parking lot as camel tours are also offered here.

If you want, you can fortify yourself beforehand with a snack or a coffee in Fuertevida. And maybe you should go to a toilet again, as there is no way to do this on the hike itself.

We start our way towards the Calderon Hondo. After about 300 m the path forks, here you can decide whether you want to walk around the mountain clockwise to the left or counterclockwise to the right. If, like us, you intend to go around the whole mountain, it doesn’t matter, so we just go left. A slight but steady climb now begins here, offering a fantastic view of the west and the town El Cotillo on the west coast. The path here is not the best, sturdy footwear is a must for that reason alone. On the further way you come across the Atlas ground squirrel everywhere on the island.

When you have circled the mountain about halfway, you come to a path that is paved with rocks. Here you can also see the path up to the caldera, where there is a kind of viewing platform. From here you have a wonderful view of the caldera and the fascinating landscape of the island. Looking north you can see Lanzarote and Playa Blanca. Very brave adventurers leave the official route here and circle the volcanic crater along the upper edge, but we prefer not to risk anything and go back down.

Once at the bottom, continue to the right with the circuit on the paved path. This is much easier to walk than the gravel road on the other side. That is why it is now moving very quickly and you soon come back to the fork where you turned left earlier.

Thus, the mountain is circled in less than 2 hours. In terms of difficulty, I would classify it as easy to medium, with the only really strenuous one being the last ascent to the caldera. As already written, sturdy shoes are mandatory and also good sun protection, as there is no shade here. We have also seen many families with children, so that a family excursion together as an alternative to just staying at the beach provides variety.

There are other old extinct volcanoes nearby, which we would like to explore later. 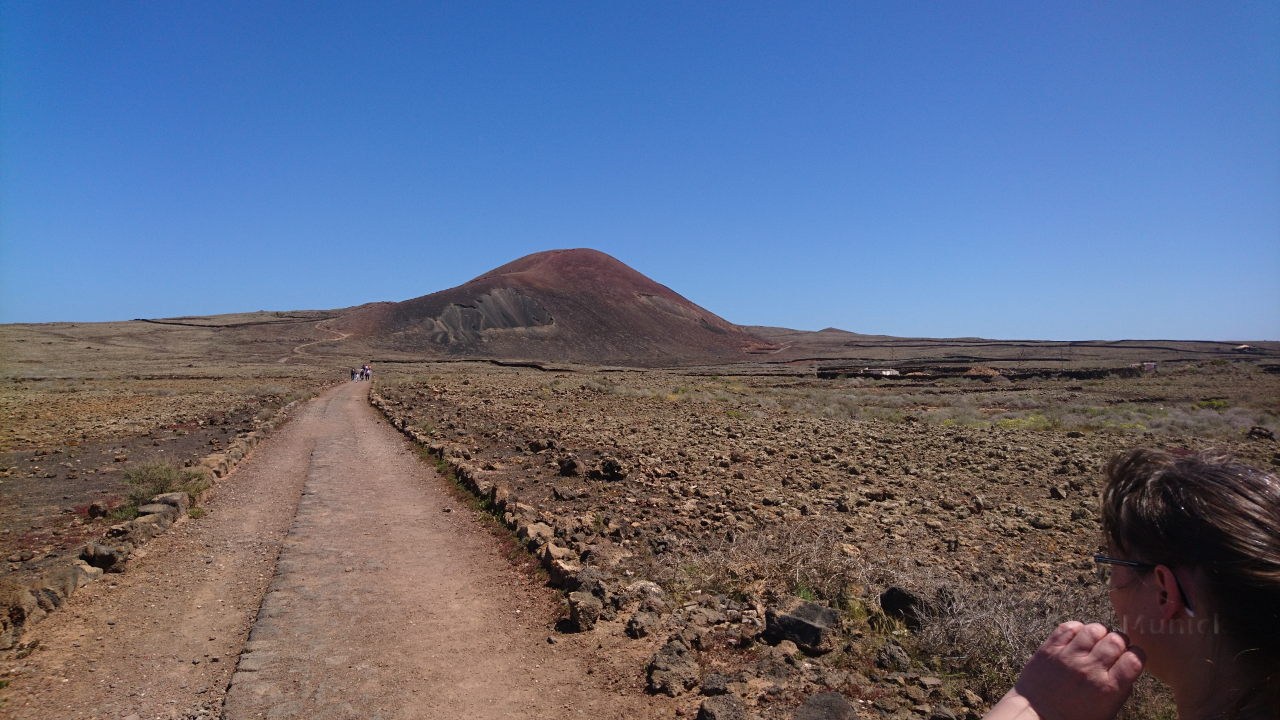