Fuerteventura – Jeep Safari in the south of Jandia

Here we go again: we are on vacation and back again on Fuerteventura. The first time as Mr. and Mrs. Munick and of course, we are in our favourite hotel, the Allsun Esquinzo Beach. After relaxing and planning some trips on the first day it is time again for us to start a new adventure.

We booked a Jeep Safari into the Jandia National Park in the south of the island. This tour is offered and executed by Discovery Safari. If you’re asking yourself, why we don’t go there on our own, the answer is very simple. Shortly after Morro Jable the roads are not paved anymore and only gravel roads. More or less all contracts for rental cars include clauses that you must not drive on unpaved roads. So this part of the island is only accessible for tourist by either booking guided tours like ours or rent a 4×4 car like a jeep. I have to admit that we saw lots of rental cars there despite all the warnings and you could lose all your insurances on that car by going there and paying it on your own. I was also told that the police will also check regularly for rental cars in that area.

We started in the morning shortly before half past 9 and were picked up close to our hotel in one of the Land Rover Discovery. While going to the actual starting point at the port of Morro Jable we picked up some more participants. After arriving at the port we had to wait for more people and cars. So we spent the time by walking aroud in the harbour area. The water is crystal clear and you can watch lots of fishes, including some stingrays who have been living in the harbor area for quite some time. There is also a project for the reintroduction of sea turtles on the Canary island. Four of the seven sea turtle species had been breeding on the Canarys and the projects wants to help to bring them back.

A quarter past ten all participants and guides had arrived and we had a short introduction of what we could expect this day. There were guides speaking several languages, Spanish, English, German, French and Italian were offered. The people were distributed into the different cars mostly according to the languages they spoke.

So we stayed in the same car we were picked up. It was an old Land Rover Discovery, a real all-wheel drive and no SUV. Miguel’s driving style was quite aggressive, but we never felt unsafe. Shortly after the start we stopped at a location and were suddenly surroundes by goats. We were told to stay insinde of the cars, bur some of the guides left the cars and were chasing the goats around. The goats were quite curious and also took some deeper looks into some of the cars, so we had some fun.

Then we went on going over a pass in direction Cofete. After arriving the pass we stopped and got out of our car. The wind was quite strong up here and my baseball cap, which just bought the day before, was blown away. “Well there it goes” was my first thought. But our German guide Tino was running after it and yes, he found it just behing the pass, where almost no wind was blowing. He gave it back to me and gave me the advise not wearing it up here today. After this episode I could really enjoy the beautiful look over both sides of the peninsula of Jandia. Especially the view on the beaches on the northern side was fantastic.

Then we went on in direction to Cofete with short stop to get to know more about the Canary Island spurge, a succulent plant which is endemic to the Canary islands. After this stop we went on to the beaches of Cofete, passing the small village Cofete, just some hundred meters away from the beaches. From the beaches you have a fantastic view on the mountains and the legendary Villa Winter. There are some conspiracy theories about this building, built by a German engineer during WWII and standing there very lonely in the landscape.

We had some time to walk around the beach. Swimming is not allowed here, as there are some strong ocean currents here, which make it very dangerous. So we went on with our tour again over the pass to the south side of Jandia for our stop to go swimming. The beach is called Palya Ladesma and a very lonely and beautiful place to go swimming. The Atlantic ocean was still quite warm with 22°C, so swimming here was very nice. After roughly one hour we headed on to our next stop, the Faro de Punta Jandia, a lighthouse at the western end of the island. At this point two different ocean currents clash and so the waves reach highs of up to six meters. When we were here we didn’t see such high waves, but it was still very interesting seeing waves coming at each other from different directions.

The last visit on the Safari was the lunch at the restaurant “El Caleton” in El Puertito, a small fishing village roughly one mile from Faro de Punta Jandia. As starter we had Papas arrugadas, small Canarian potatoes with Mojo sauce, salad and bread. The main course was a delicious paella. As drinks we had water and white wine. This was all included in the rate of 59 € per person, a very fair price. After the lunch we were brought back straight to our hotel.

I can only recommend this tour as it is worth every Cent. This is a unique experience for all tourists on Fuerteventura and a must-see. I would definitely do it again one day.

Here are some pictures of this day: 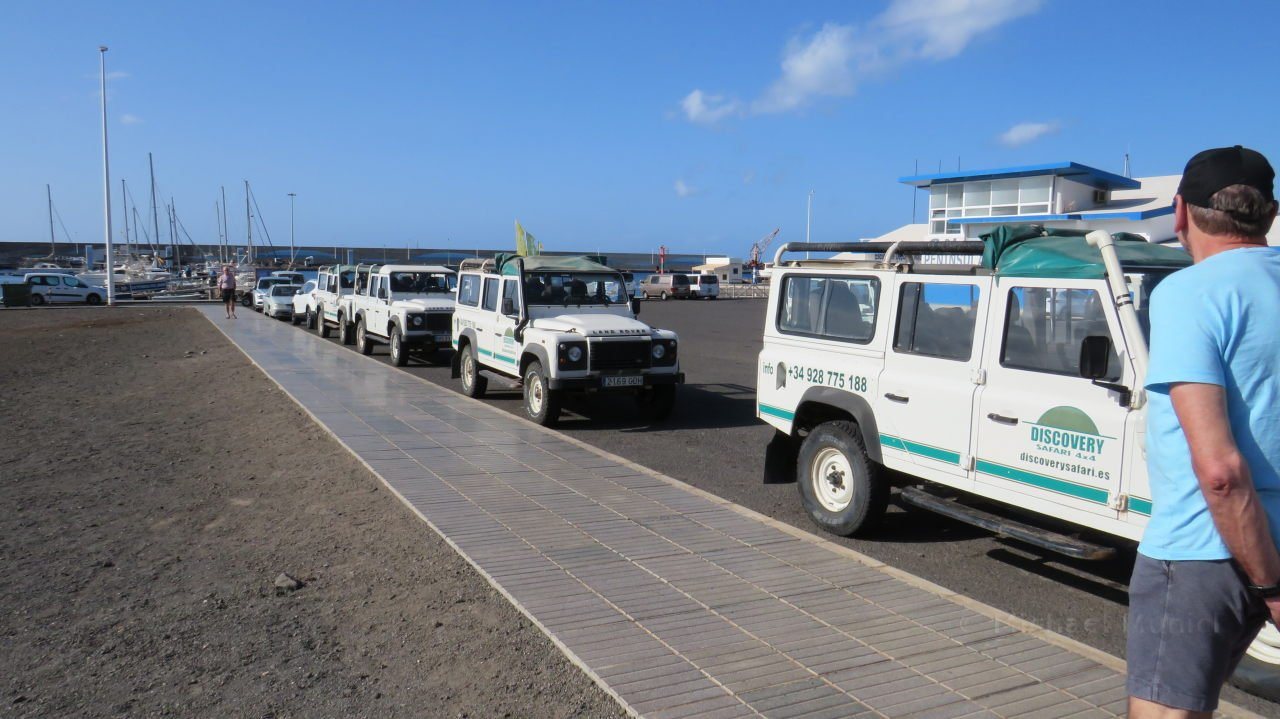