Washington, D.C. in a nutshell

As announced in the previous post, I now dedicate myself to articles from various trips, either business or private. As a disclaimer, I would like to start with the fact that business trips also include free time, namely after meetings or even a weekend when the trip takes longer. The business trips are not for private enjoyment, but for real business purposes. Although it is very nice to see more of a city than the airport, the hotel and the conference venue.

In Washington, D.C. I’ve been on business six times in the past years. This includes really hardcore trips where you fly there on Tuesdays, have a meeting on Wednesday morning and return in the late afternoon. I can’t recommend it because it’s really exhausting. Longer trips are better when you might have a weekend off.

Today’s post is from a walk I took on the day I left Washington last year. Since there were more than 6 hours between checking out from the hotel and departure, I had to keep myself busy. So I set off in the direction of the White House and there, or at Lafayette Square, the short walk begins, which, depending on the pace, can be mastered in less than an hour and a half.

From Lafayette Square you can already see the White House, the seat of the American President. On my previous visits to the city, you could get to the fence. This is not possible in October 2019 because the current president has the fence replaced. If it was previously about 2 m high (more precisely 6 ft 6 inch), the new fence will be twice as high at 13 ft, thus bringing more distance between the President and his people. The protest tent, which has stood here since 1981, is still there, even if the original protester died in 2016.

Then turn right on Dwight D. Eisenhower Executive Office Building and left on 17th Street. On the right side of the street there are several buildings such as the American Red Cross National Headquarters and the Organization of American States. After crossing Constitution Avenue, the park-like National Mall begins. We go to the right and first reach the World War 2 Memorial. On the two opposite sides, the two fronts on which the Americans fought are commemorated, the war in Europe on the one hand and the war in the Pacific on the other. We continue along the Reflecting Pool towards the Lincoln Memorial. It usually gets a bit crowded here, as it is teeming with visitors. Getting a decent photo of Lincoln without other people is simply impossible unless you get here very early. On the left side of the memorial is his inaugural address for his first term and on the right that of his second term. If you step out of the Lincoln Memorial, you have the look that Martin Luther King Jr. had at his famous “I have a dream” speech, which is also reminiscent of a stone slab in the floor. Or you just remember the scene from Forrest Gump …

From here it goes back along the Reflecting Pool towards the Washington Monument. To the left and right of the National Mall are several Smithsonian museums, all of which are free to visit. I’ll post a report from the National Air and Space Museum here later. I find the relatively new National Museum of African American History impressive in terms of architecture. When I was here for the first time in 2013, there was only a huge excavation.

You can also go in and up into the Washington Monument. Due to the lack of time, I save myself that and go back on the way back, which this time leads along the other side of the White House. I find something curious about it, namely the National Christmas Tree. Although it looks more like someone has already sawed off the tip for home. Back in front of the White House I go to the hotel and towards the airport.

Actually, I had planned to be here with my wife in May 2020 and visit a few more museums. Unfortunately, the Corona virus messes up everything this year. So the next visit has to wait.

As always, here are a few impressions: 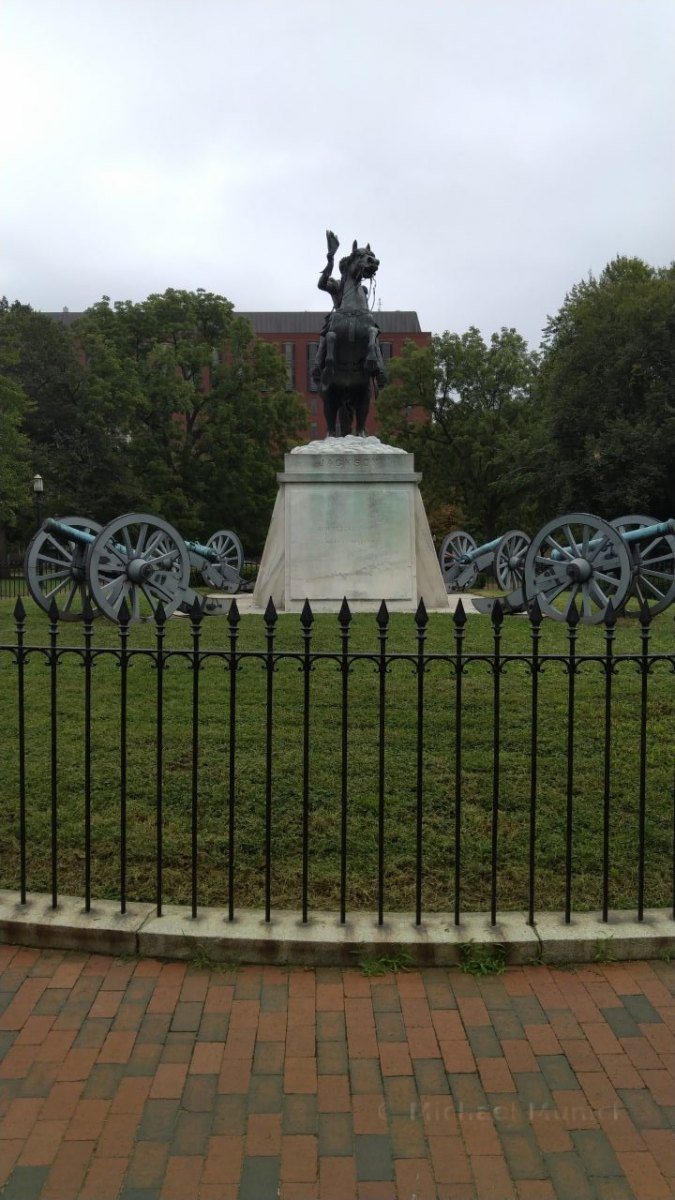