In the business class of American Airlines

Today I want to start with the first personal report about an airline. And since the alphabet starts with A, my first post is about a business class flight from London Heathrow to Charlotte, NC. Actually, my flights with airberlin should have belonged here, since the “i” comes before the “m”, but unfortunately airberlin has filed bankruptcy.

The trip was to be to our subsidiary in New Bern, NC, and the route chosen by our travel agent was:

Probably the most direct route you can take, actually. The first route was a route with the typical inner-European business class: in the Airbus A320 on a row of three, the middle seat remains empty. Not really a lot of luxury and therefore not worth mentioning. Due to the lack of time (the flight left Tegel at 7:05 am) I hadn’t been to the BA Lounge in TXL either.

Arrived at Heathrow halfway on time, of course, we got an outside position which meant: bus boarding. With a transfer time of less than 2 hours, I knew: it was going to be tight. When I arrived in Terminal 5, I was immediately intercepted and given an orange “PRIORITY” sign, which should get me through various security checks more quickly. Actually unnecessary, as Fast Lane is actually standard as a Business Class passenger. The bus then went to Terminal 3, where I first had to get a ticket from American Airlines. The one printed out by BA had to be exchanged, great 🙁

That took a while, of course, and after receiving it, I went straight through passport control and subsequent security control towards the gate. And here’s the next surprise: bus boarding 🙂

Apparently this was the last bus to the plane, as we were waiting for 3 other passengers before we finally left. An Airbus A330-300 awaited us on the apron, which we then quickly boarded. My seat was 6H, a window seat as requested. Since the seats are arranged according to the so-called “Heringbone” and thus a 1-2-1 arrangement prevails, every passenger in Business Class has direct access to the aisle, which I like very much because you don’t have to step over anyone at the window .

The seats are very comfortable, there is an amenities pack with the usual contents such as creams, earplugs and blindfold, as well as pillows and a blanket. There is a lot of space in the overhead bins, but I didn’t need it because I checked in my luggage. And yes, that came along without any problems despite the limited time. 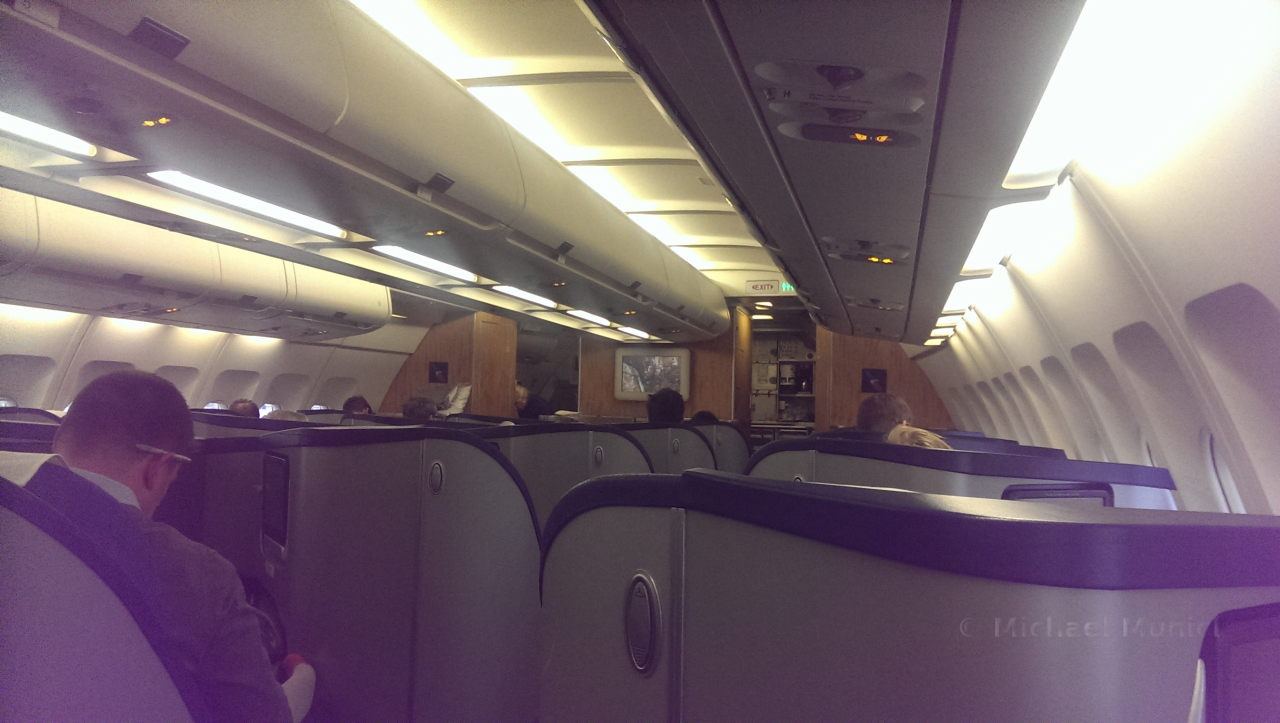 After we started, I scoured the range of feature films and have to say that it was extensive and quite up-to-date. So: thumbs up.

Shortly afterwards there was the first meal. I decided on something with chicken 🙂 Looked delicious, tasted good too. A little tip that every airline should heed: Either you cut the rolls in the middle yourself or you give the passengers sharp knives. With the knives that you get as a passenger, you can’t cut a bread properly and it looks like a pig afterwards …

The service on the rest of the flight was also good, and someone kept dropping by and asking if they wanted something to drink. Before landing there was a small bite to eat. Unfortunately, with the best will in the world, I can’t remember what exactly that should have been. All I know is that I ate it.

We arrived in Charlotte more than on time and I have to say that it was the fastest entry into the US I have ever experienced. I didn’t have to wait 5 minutes for the suitcase. We were obviously very lucky that no plane from abroad arrived before us, as nobody was there before me and I was through immigration in no time and I had a lot of time before my flight to New Bern.

Overall a very positive experience and I would fly with AA again anytime.

As usual, here are a few pictures: