After a very long time there is another sign of life from me. Today, it’s about a field report on the subject of flying, but not in Business Class, but on traveling in Premium Economy Class.

First of all, what distinguishes Premium Economy Class? As the name suggests, this is an intermediate class between economy and business. You have more legroom, the seats are a little wider so that two people sitting next to each other can use the armrest at the same time. So it’s not quite as tight as in the “coach”. Furthermore the seats are often embedded in shells, so that when the backrest is adjusted, the person behind does not have it in their face. In addition, you can usually take more luggage with you.

Depending on the airline, there may also be different discounts. These include:

In terms of price, the Premium Economy is somewhere between Business Class and Economy. Everyone has to decide for themselves whether you want to spend more money for more comfort.

Today in this report I am going to write about my experiences with the Premium Economy at Air France.

Part 1: With the Airbus A380 to Washington and back

The first part takes the A380 to Washington. The flight from Berlin to Paris was completely normal in economy. I noticed that the seat pitch felt smaller than with Lufthansa or British Airways. After arrival in Paris, I changed the terminal and arrived at the gate halfway on time. Since you are in boarding zone 2 as a guest of the Premium Economy, you can get on the plane very quickly if the Economy has not yet boarded. However, that doesn’t matter much for the A380, as Air France has packed the PE class behind the business class on the upper deck. Behind the PE there is a small economy with only a few rows. Most of the Eco is housed on the main deck. This ensures that boarding is very relaxed for both the Business and Premium Eco.

The seating arrangement of the Premium Eco is 2-3-2, so that you have to climb over a maximum of one passenger. I had seat 85A on the outward flight, so it was located by the window. The advantage of this space is that there are additional luggage compartments on the side in which you can stow your laptop and other things.

What is noticeable negatively, however, is that the Premium Economy is no longer the newest and has already rocked a lot. This is mainly because Air France wants to get rid of the A380 today rather than tomorrow.

The food was definitely not that great. You could choose between chicken with sherry vinegar and vegetable puree or pasta with Napoli sauce. I chose the chicken, which was just ok. But it is definitely not the best cuisine, as there are airlines that can do better.

I spent the time watching movies. The entertainment program is good, but not great. You can still find enough films to watch. And that in German too, if you don’t speak French or English. So: thumbs up.

Shortly before landing there was a small snack, but I didn’t eat it.

A few days later the return flight was also in an A380. This time, however, I had an aisle seat in the middle. In this Airbus, too, the condition of the PE was rather poor. However, this Airbus should be returned to the lessor at the beginning of 2020, so that nothing is invested in them.

Since this was an overnight flight from Washington to Paris, I wanted to try to sleep. Shortly after the start diner was served. I opted for Farfalle in a cheese sauce, which was reasonably okay in terms of taste. Then I tried to sleep, which I couldn’t really do. In contrast to the economy seats, the seat surface of the PE seats is pushed forward so that the backrest tilts slightly. I couldn’t really sleep in it though, so I kept watching the entertainment program and soon I know all the Marvel films 🙂

Shortly before landing there was breakfast again, which I declined, however, as there was nothing for me.

All in all, Air France’s Premium Economy in the A380 is not bad, but since Air France will probably no longer invest in the A380, I can only recommend it to a limited extent. For flights from east to west that are during the day and you should stay awake, it is good, as the extra legroom compared to economy is really good.

I will give an overall conclusion after the second part, which will then deal with the premium economy in the Boeing 777. 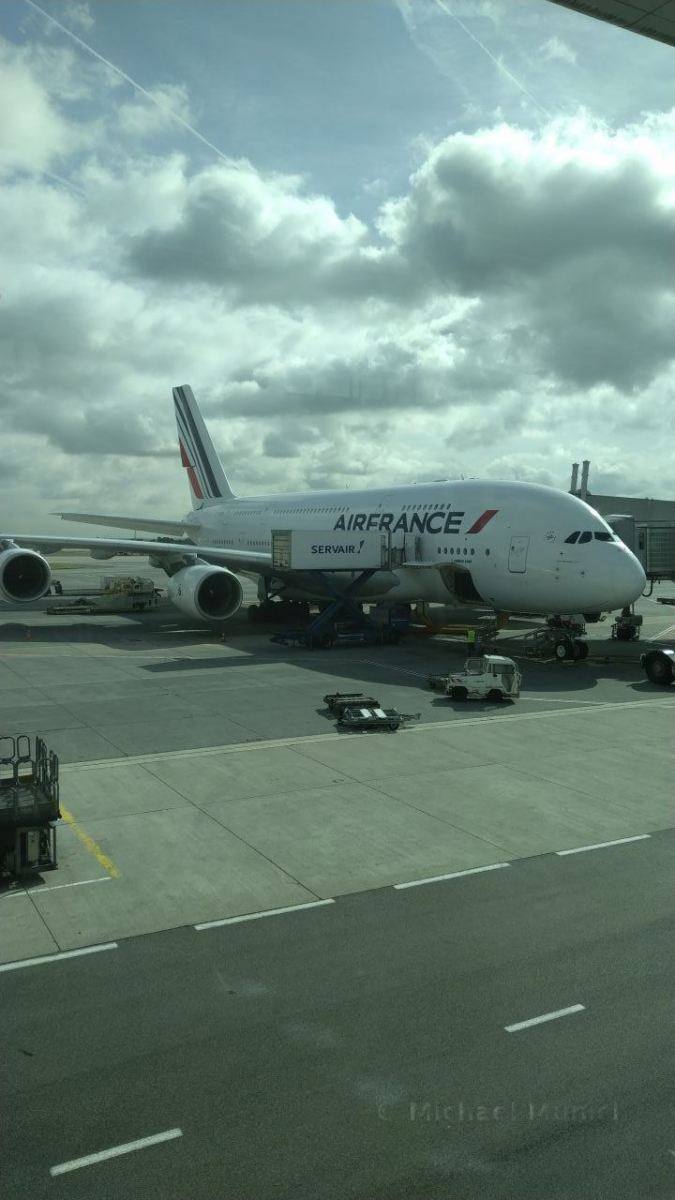