So after sharing the first part of my experience with the Premium Economy at Air France two days ago, here’s the second part. This time, however, not with the Airbus A380, but with the Boeing 777. As an aircraft, I definitely prefer the A380, because in my experience it is smoother in the air than smaller aircrafts, but above all because it is much quieter inside despite the four engines compared for example to the Triple Seven.

Part 1 of the trip took me first to Paris Charles de Gaulle and from there to Shanghai Pudong. The aircraft here was the shorter version of the Triple Seven, the Boeing 777-200ER. Air France owns 25 planes of this type, which fly around in 4 different configurations. In the variant I flew in, rows 19 to 21 were seated in a 2-4-2 configuration as Premium Economy. The Premium Economy here consists of just 24 seats, while in the A380 it is over 50% larger with 38 seats and, due to the 2-3-2 arrangement, also feels much less densely seated.

What has to be emphasized positively compared to the A380 is the quality of the seats and the interior. You can tell that this class is newer here, especially in the condition and also on the monitor for the IFE (In-Flight Entertainment). The latter is not only larger, but also has a better resolution and thus provides the more beautiful picture. In my opinion, the content of the program offered is identical to that in the A380. In any case, I couldn’t find any major differences.

After we left Paris halfway on time we had our first meal about an hour after the start. I chose a chicken in honey sauce with broccoli and polenta, but it tasted awful. Since it was a night flight, as is usual to the east, I then tried to sleep. As with the A380, I totally failed. By shifting the seat, I did not get into a comfortable sleeping position and could sleep for maybe half an hour. So I spent the rest of the flight with watching films.

Shortly before landing, there was breakfast, which I refused, as there was not something for me that I found tasty.

Arrived in Shanghai over time, everything went super fast on entry, the suitcases arrived on time at the baggage carousel and I was at the hotel by taxi shortly after 9 a.m., where I had to wait two hours for a room.

I will post pictures of Shanghai and Nanjing here at a later date.

Then it went back from Nanjing with China Eastern to Beijing and then again with Air France via Paris to Berlin.

The flight from Beijing to Paris was again a Boeing 777, but this time the larger version 777-300ER. Air France has 43 of the 10 m longer variant in its fleet, which are flown in 4 different configurations. The seating arrangement was 2-4-2 again, but there were a total of 28 Premium Economy seats, which was due to the fact that there were 2 extra seats on the outside just behind the doors. I wouldn’t recommend these even though they offer more legroom. On the one hand, the screen is stowed in the armrests so that you have to fold it out and I don’t find this sitting position to watch the video comfortable. In addition, the monitor has to be stowed away during take-off and landing and therefore no entertainment in the form of films or series. And even worse, those seats have no window, even if you sit against the outside wall.

Still, I liked the layout better than the one in the 777-200ER. Why? Well, the toilets were right at the beginning of the premium economy class. With the 200ER, you had to walk through half economy to go to the bathroom. With a 10 hour flight this cannot be avoided.

What was so special about the flight from Beijing to Paris? Usually, flights from east to west are flights that operate during the day. You get onboard e.g. at 9 in Tegel on a plane to New York and will arrive 12 noon. However, this flight started at 1:45 in the morning and we were in Paris around 6:00 in the morning. So I had to try to sleep somehow if I didn’t want to completely unbalance my day-night rhythm. Shortly after the start, food was served again, this time in proper Chinese style, which was actually quite tasty. Then I tried to sleep and guess what: It actually worked quite well. I was able to sleep a total of 5 hours, which is really a lot for me on an airplane. Apparently I was so tired that the uncomfortable sleeping position didn’t really matter.

Shortly before landing there was breakfast again, which I declined with thanks. And just 4 hours later I was home again.

Overall, it can be said that Air France’s Premium Economy product is quite good. Especially for flights that take place during the day, such as from Europe to the USA or from China to Europe, these are a real alternative to business class, especially if you have to or want to pay attention to the price.

Unfortunately, AF neglects the A380, as these are soon to be phased out and the quality there is no longer up to date. In general, AF would have to take money in hand with the A380 and equip the cabin again, which is unlikely to happen, at least not with the leased models. In the Boeing 777, the Premium Eco is significantly better.

However, I still see room for improvement in the Premium Economy at Air France. For one thing, the food was definitely in need of improvement. I don’t expect any haut cuisine in this class, but there should be a little more choice. On the other hand, access to the Business Lounge is already included with other airlines. With Air France you should still pay at least 25 euros per person, which in my opinion is completely overpriced.

Here are a few more impressions: 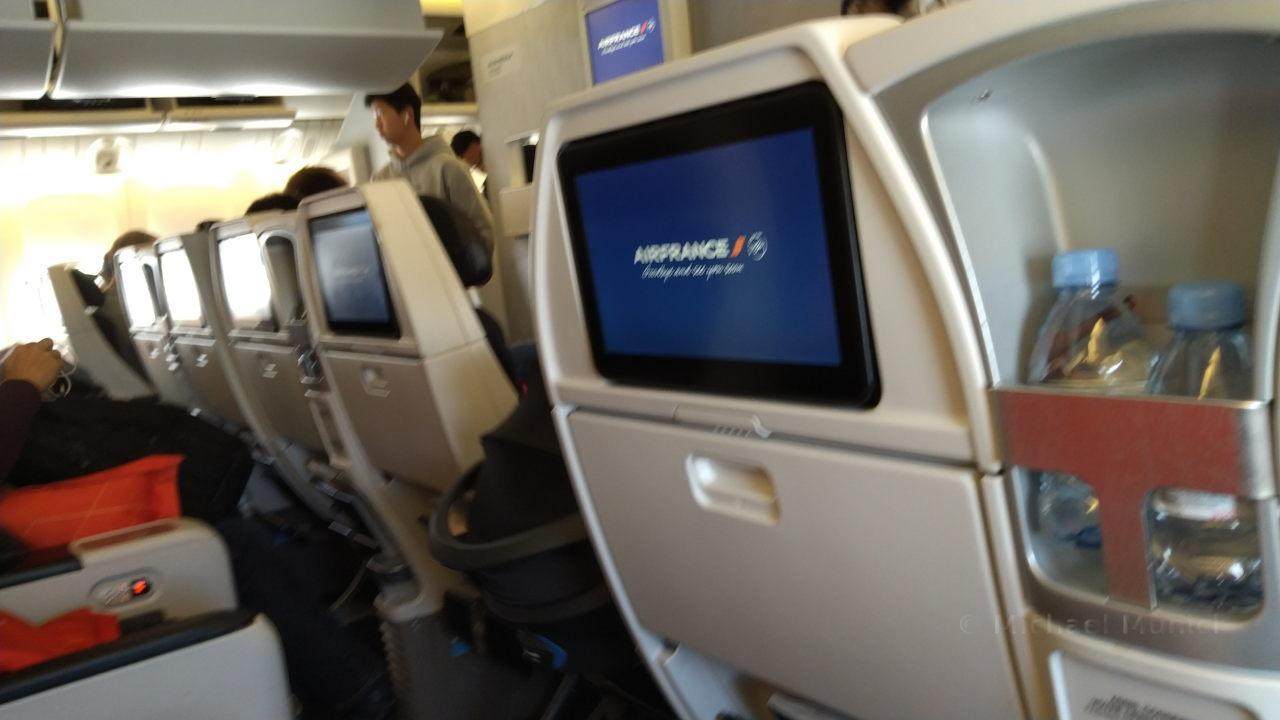