Today there is another article from the category flying. It had been clear for some time that the semi-annual meetings of the SC59D should take place in Sydney, Australia, but the closer they got, the more doubts grew. First there were the devastating bush fires in the area, then at the end of January Corona struck and half the world panics.

Our booked flight was supposed to go via Hong Kong, so it would have to be ensured that there were no problems with entry. Although Australia no longer lets in people who have been in Mainland China in the last 14 days, Hong Kong turned out to be no problem. There were also no restrictions on such trips from my employer, so we could start on Tuesday.

The online check-in at Cathay was a cramp. The page crashed several times, forgot to enter data and the like. Since the first flight was with Lufthansa, you could check in with Lufthansa for all flights and that went smoothly.

The first flight then went from Tegel to Frankfurt, also in Business Class, but that’s not real Business Class, only the middle seat remains free. Beside me sat Fredi Bobic incidentally.

The flight from Frankfurt to Hong Kong was in a Boeing 777-300ER. The business class is laid out in the typical herring-bone arrangement, so that every seat has direct access to the aisle. Each seat has a fold-out monitor, which can also remain unfolded during taxiing and take-off and landing. Next to the seat is a compartment that holds the headphones, the amenity kit and a bottle of water. Furthermore, there is a USB socket and a power connection at each place, so that you can charge your smartphone or work on a laptop without having to pay attention to the battery level.

Immediately after boarding you can choose between water, juice or champagne and the menu cards are served to you. Otherwise there is a pillow and a bag that not only contains a blanket, but also a cover that can be placed on the seat and is a kind of mattress. The seat can be lowered to a completely flat bed, as is standard in business class today.

The entertainment program is really great. From current movies to classics to Hong Kong Martial Art films, there is everything here. You can also spend the whole flight just watching movies like James Bond, Star Wars or countless Marvel films. Another plus: almost all films are available in German as well as English, and there are also a few other languages ​​such as Chinese, Japanese and others. The only negative point is that the touch screen sometimes reacts very sluggishly.

For the first meal I only chose the main course, I didn’t want to eat the salad beforehand or the fish for various reasons. For my main course, I chose the burger with fries, which was really tasty. I ordered a beer with it. The Betsy brand is specially brewed for Cathay Pacific and is reminiscent of the airline’s first aircraft, a DC-3, which was called Betsy. A pale ale above the clouds tastes far better than any normal lager or beer. I didn’t get a dessert because I fell asleep after enjoying the burger and they didn’t want to wake me up, which is absolutely okay.

For breakfast I ordered a western style breakfast, which consisted of an omelette filled with mushrooms, 2 sausages and fried potatoes as well as fruits and 2 warm pastries (one filled with apple and a croissant). Shortly afterwards we started to land and got off in Hong Kong.

In Hong Kong we had a good one and a half hours until the second flight. After a security check and one fever fair, we went to the Cathay Lounge, which was extremely empty. On the one hand, this could be due to the time, on the other hand, it could also be due to the corona virus. Cathay suffers a lot and has parked a large part of its fleet at the airport.

The last stage should bring us to Sydney. This time we flew with an Airbus A330-300, which in business has the same 1-2-1 design as the Boeing 777. You can tell that the Airbus is a few centimeters narrower because the storage compartment is smaller. Otherwise it is similar to that described above. The in-flight entertainment is about the same, but I found the monitors in the Airbus better, on the one hand in terms of the image, which was much sharper and on the other hand the reaction to touch and inputs.

With the meal there was again a breakfast, which was similar to the previous one. After that, I watched a few movies and slept a little more. The second meal was served almost 2 hours before landing. As a starter I took the potato and leek soup which was really good. The only downer: the bread was not brought immediately, but only when everyone else had got their start. Since I had already finished the soup, it was too late. There is still room for optimization here. For the main course I chose the beef fillet, which was really good. I didn’t take any dessert again, I was already full after the two courses.

We landed in Sydney over-punctually and got off the plane.

All in all, Cathay is definitely recommended on routes to Asia or Australia. There is still room for improvement in the details, but the level is already very, very high. As far as the food is concerned, I’ve hardly seen anything better.

It is to be hoped that Cathay will survive the Corona crisis well, as they are suffering massively from it and about 2/3 of their fleet is currently on the ground, as many flights have to be canceled due to a lack of passenger numbers. 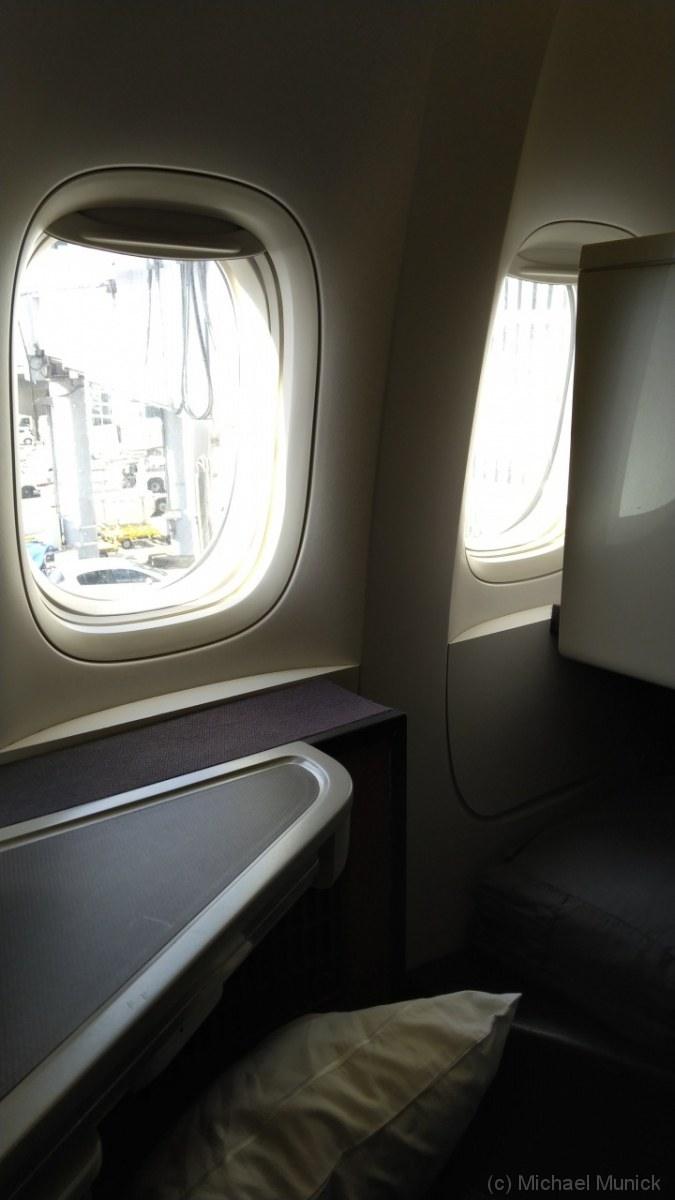