Today I have an addition to my post about my experience in Business Class with Cathay Pacific.

On March 14th Unfortunately, after 10 days in Australia it was so far that I had to fly back. In view of the emerging corona crisis, I am glad that everything went smoothly for us.

The return flight was booked again with Cathay Pacific and was via Hong Kong to London Heathrow and then to Berlin Tegel. The first two flights were carried out with Cathay Pacific, the last with British Airways, which, however, does not really differ from other European airlines such as Lufthansa or Air France. The second flight from Hong Kong to Heathrow was in a Boeing 777-300, which I discussed in my previous post.

For this reason I will limit myself to the first part of the route from Sydney to Hong Kong. In contrast to my flight to Sydney, which was carried out with an Airbus A330-300, here I went back with an Airbus A350-900. As of March 2020, Cathay Pacific owns 24 of this, in my opinion the most modern, wide-body aircraft plus 8 more of the larger A350-1000 variant. Four more of the smaller and 12 of the larger have been ordered. As with the aircraft described in the other article, the seat layout in business is also a 1-2-1 layout in the hering-bone layout that is already common today. As a result, all seats have direct access to the aisle and do not have to climb over someone sitting next to them. In addition to the 38 seats in Business Class, there are 28 in Premium Economy in a 2-4-2 configuration and 214 in a 3-3-3 configuration in Economy.

What can I say about the equipment? The space is larger than in the A330, but a little smaller than in the 777. This can be seen from the size of the storage compartment next to the control panel. The control console for the seat and especially for the in-flight entertainment system is much better than on previous aircraft, which is due to the fact that the A350 is the much more modern aircraft. This plane had the registration B-LRA and was therefore 4 years old and the first aircraft of the A350 series at Cathay with MSN 29. If you look for something, you will find that this aircraft was the first of this model at Cathay.. In some places you have already seen this, so some parts of the panel were a bit loose at one point.

The screen is much better in resolution and handling; the handling I criticized in the other two models is not available here. The selection of films is also huge and there was no boredom on the eight and a half hour flight. The remote control has another highlight: you can display the flight route or other information on the screen of the control unit without interrupting the actual film.

The food and service were quite good. Particularly noteworthy is that I couldn’t find any food on the menu plan for Business Class that I would have liked or that I could have eaten because of allergies. I could then choose from the Premium Economy and Economy meals and opted for a chicken breast fillet with mashed potatoes and mixed vegetables, which tasted really good.

From my point of view, the only real point of criticism with Cathay is that the flight attendances do not go around actively distributing drinks. I’ve seen this happen more often with other airlines. You can ask someone to come to you at the push of a button or you can go to the galley yourself and ask for a drink, but I think for business class it should be normal to bring drinks on regular bases. But maybe that was also due to the exceptional situation due to Corona …

Nothing changes in my conclusion from the last post: If you want to go to Hong Kong or Australia or New Zealand, you can recommend Cathay Pacific without reservation.

Here are a few pictures from the A350. 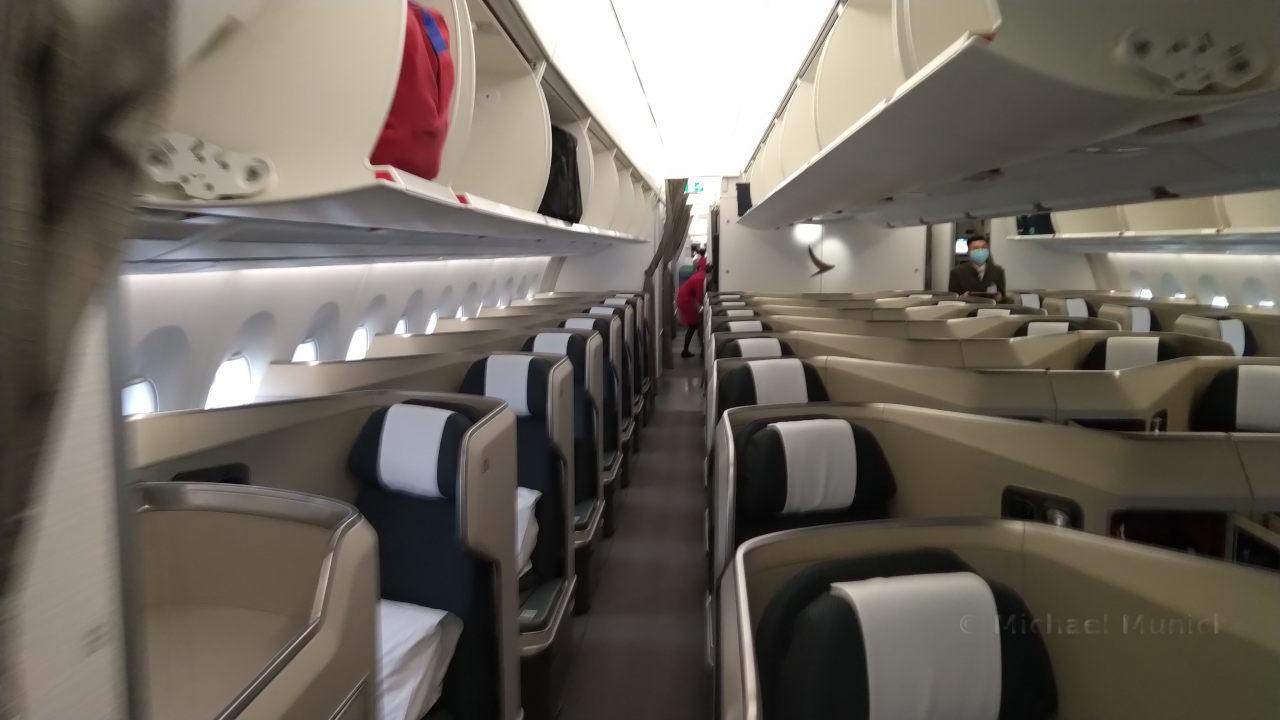