Fuerteventura – A visit in Betancuria

Today I will report about our visit of Betancuria. Actually, we had completely other plans this day. But how did we get there?

It was Sunday and we planned to go hiking in the north of the island. Unfortunately there had been heavy storms on Fuerteventura for the last two days. Hiking during a storm is already not really funny, but on a plain, like we planned, with such strong winds would definitely be quite dangerous. So we had to change our plans. But on a Sunday this can be a problem, almost all museums and exhibitions were closed on that day. We found in our guide book something, what sounded quite interesting: the Finca Pepe near Betancuria.This is a farm where goat cheese is produced. According to the book you can buy the cheese thereand also from 9 to 12 watch the production of goat cheese. As it already was shortly after 10 am and Google Maps calculated at least 70, we had to hurry up.

The easiest way to find the Finca Pepe is coming from the north using the FV-30 in direction Betancuria and turn right directly at the city limit sign onto a small road. There is also a sign directly at the turn leading the way to the finca. After roughly 1 km you will reach the finca and park your car. There are already a lot of goats behind the fence, so you know, you are at the right place.

But we were unlucky. It was a quarter to twelve, but there was no one except a small child playing and a large dog. We went past the unleashed dog into the building where we saw lots of old tools, which might be used for producing cheese. The we saw a young man, who ignored us completely except for the “Ola!”. As there was no one else to see, we decided to leave. This is unfortunate, because I would really like to watch how (goat) cheese is made. So we went on to go to Betancuria. There is a free parking lot at the south entrance to the town.

Betancuria was founded in 1404 and was the island’s capital until 1834. The founder of the town was Jean de Bethencourt, who conquered the Canary islands in the early 15th century and was named after him. The town is very small, but very beautiful located in a valley, surrounded by the mountains. In contrast to most other parts of the island there is a lot of green here. They grow vegetables like potatoes, what you can see in the gallery below. On a Sunday it is very quiet and sleepy here. Most of the shops are closed and even most of the restaurants, too. Of course, the Aloe Vera shop with all the products from this plant was open and my wife bought enough to last until our next visit here. 🙂 Then we discovered a sign with a map of the old, historic and renovated Betancuria. So went went to see this part. The traditional style of the building is very nice and you feel like you have traveled to the old times. At the larger square there is the church Santa Maria, where you can see sanctuaries and relicts. The ticket price is really low, only 1.50 €.

When we got hungry we found a very nice restaurant: the Casa Princess Arminda. Located in a backyard traditional Canarian food is served for very reasonable prices. But you should have time: the waiter is not in a hurry at all. We ordered Papas arrugadas, the typical small potatoes cooked in very salty water served with Mojo sauce. This was really good, but I like it with more sauce. After having lunch we walked through the streets for some time and decided to go back to our hotel. But we didn’t take the same way but went south on the FV-30 in direction Pajara.

So we stopped at two lookouts (Miradors). The first one is Mirador Las Peñitas shortly after Vega de Rio Palmas and the second one is the Mirador del Risco de las Peñas. You have a wonderful look over the landscape. From the first Mirador you can also see the failed try to build a barrier lake. The barrier lake silted up within a very short time.

We couldn’t really enjoy the second lookout. The wind was so strong, Nicole didn’t leave the car, because she was afraid, the wind could lift up her dress. I left the car, but after 2 minutes I went back into the car. So we drove the wonderful mountain road to Pajara and on to our hotel.

Although we didn’t watch the cheese production, we had a very nice trip to Betancuria and I highly recommend to visit Betancuria at least once when you are on the island. 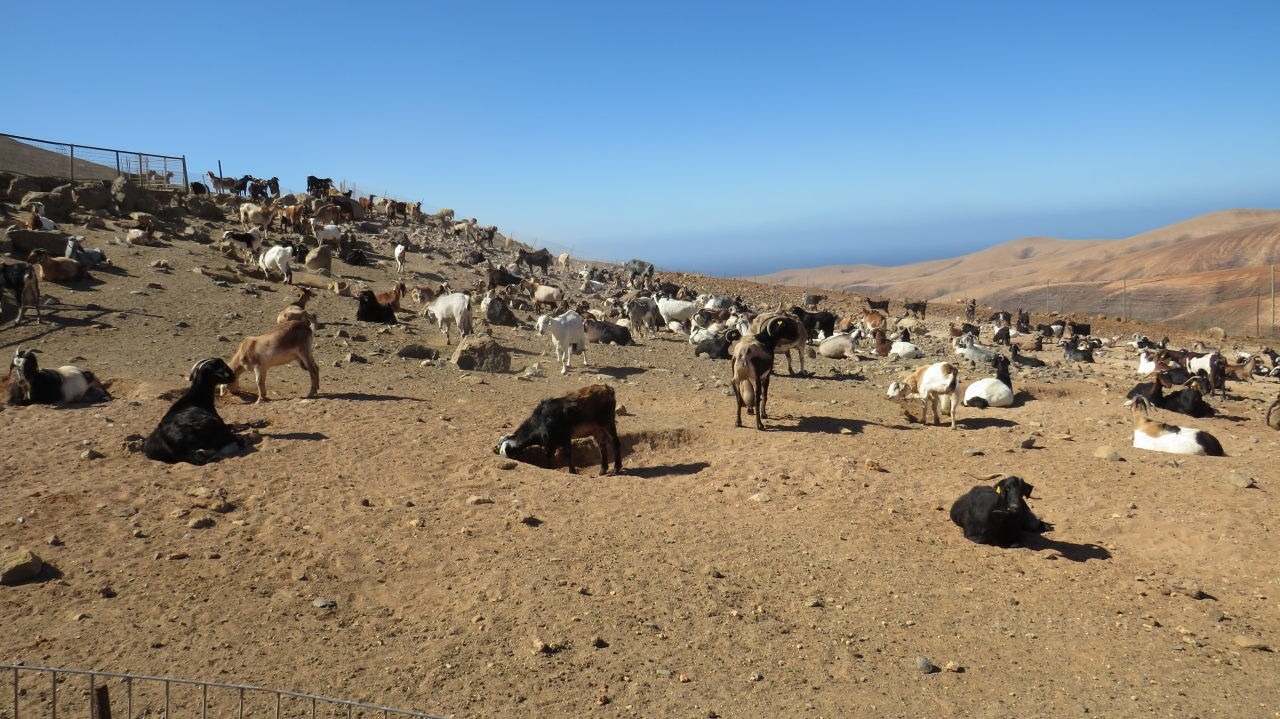