Fuerteventura – A sailing trip on the south coast

Today I would like write a new blog post about our sailing trip on the south coast of the Jandia peninsula. How did we get there?

Well, as Fuerteventura is an island, I think a tour with a boat belongs to vacation on an island. There were several offers available at our hotel:

We decided for the last point, although it was not very cheap as we had to pay 75 € each.

The tour was executed by Flounder Sailing and actually planned for Monday. But already on Sunday we doubted that this tour might happen the day after. There had been storms for the past 2 days and according to the weather forecast, Monday was expected to be even worse. And so it happened, our trip was postponed to Wednesday and went to the Oasis Park.

On Wednesday the weather was much better. Still, the wind was blowing quite strong, but far less than the past days. So we were picked up from our hotel at 10:00, went to some other hotels to fetch more people and went to the harbor of Morro Jable.

Harbor of Morro Jable? You might have read something here? Yes, that was the place, where we met before the Jeep Safari. So, at the harbor we met all other guests, we were 7 people plus our skipper. All guests were German, this proves, that Germans have taken over at least the South of the island. But, our skipper José could speak English very well. He was a very nice young man, who had been sailing all of his life.

And so our adventure started. We left the harbor with the help of the motor, but shortly after reaching the open sea, we hoist the sails and gathered some good speed. The steering wheel was taken over by Jenny, one of the guest, who had some experience in sailing. First we went eastwards passing Morro Jable. At this point, it was very calm, almost no waves and relatively low speed, as the wind was reduced due to the mountains. But leaving the lee, the speed increased significantly. That was the moment, when some of the guests, who were sitting in the front of the boat, got really wet and came back to the actual seats as fast as possible. At this point, the boat had a nice incline due to the wind. But we never felt uncomfortable, as this boat had a 3 m long keel with roughly 2 metric tons mass and we were ensured by Jose, that it is impossible to overturn. As the windforce was at some times 6 on the Beaufort scale, our skipper never set full sails and we cruised for more than 2 hours in front of the south coast of Fuerteventura. Unfortunately we were not able to see dolphins, but this was most likely because of the waves.

Then it was time to relax and we went to a bay, where we dropped anchor. Nicole and me went swimming in the Atlantic and Jose prepared small snacks including delicious goat cheese. We also had some drinks including rum and beer.

After one hour we went back to the port of Morro Jable and all guests were taken back to their hotels.

I can definitely recommend this trip. It was a lot of fun and I would do it again at any time.

Here are some pictured of our trip: 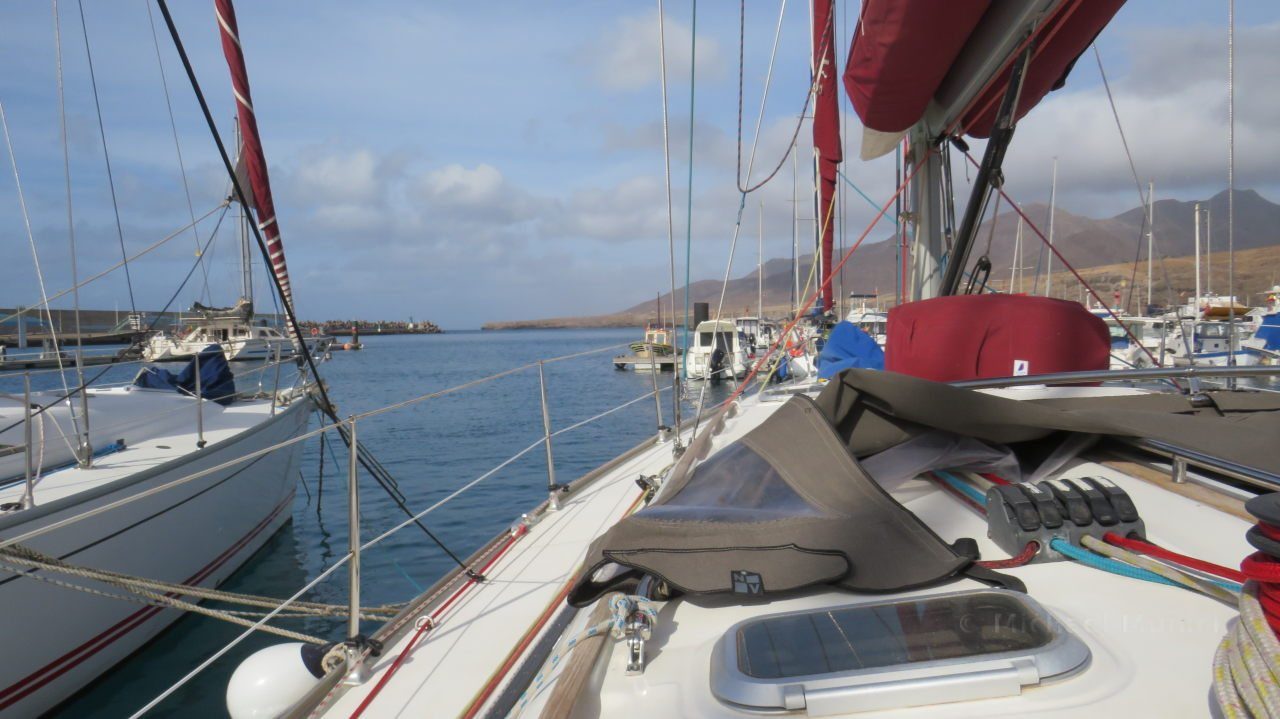